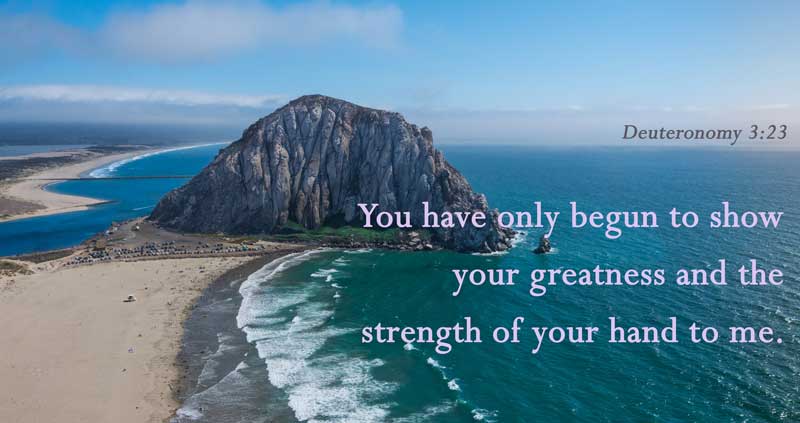 “At that time I pleaded with the LORD and said, ‘O Sovereign LORD, you have only begun to show your greatness and the strength of your hand to me, your servant. Is there any god in heaven or on earth who can perform such great and mighty deeds as you do? – Deuteronomy 3:23-24 NLT

In the third chapter of Deuteronomy, we find Moses addressing the Israelites toward the end of their wandering years and the end of Moses’ life. Moses is starting to ask the Lord to go into the Promised Land (and is denied the request). How he opens the request is this, “’O Sovereign LORD, you have only begun to show your greatness and the strength of your hand to me, your servant.”

My mouth dropped open when I read this! Moses thinks what he saw was only the beginning of God’s greatness? Let’s review some of what Moses and the Israelites saw as a group.

Now, Moses had a few other events that he saw by himself or with just a few others.

There were even more things than this, if you read the stories of Moses in the first five books. And yet, here he is saying, “you have only begun to show your greatness and the strength of your hand to me.”

Moses knew God and he knew how big and powerful and amazing God was. He didn’t think that what he’d seen during his life was the max that God could do. No, Moses knew God to be greater than all the things that he’d seen.

What do you believe about God and His greatness and power? What have you seen Him do in your life and the lives of others? Do you believe Him for more? Do you know God so well that you can not only see Him working your life, but that you can believe in Him for so much more?